Seller is an individual, or entity, who exchanges any good or service in return for payment. In the financial markets, a seller is a person or entity who is offering security they hold to be purchased by someone else. In the options market, a seller is also called a writer. The writer is on one side of the contract and receives a premium for selling the option.

Total variable cost is the aggregate amount of all variable costs associated with the cost of goods sold in a reporting period. It is a key component in the analysis of corporate profitability.

The average cost is the sum of the average variable cost and average fixed cost. It is also defined as the Total cost per unit of output.

Average product is defined as output per unit of the variable input.

Average revenue is defined as total revenue per unit of output.

Barriers to entry are the economic term describing high start-up costs or other obstacles that prevent new competitors from easily entering an industry or business sector. Barriers to entry benefit existing firms because they protect their revenues and profits.

Break-even point is the point on the supply curve at which a firm earns a normal profit. In simple words, the break-even point can be defined as a point where total costs (expenses) and total sales (revenue) are equal. 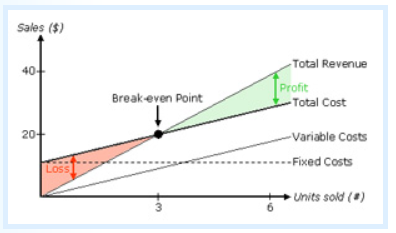 The budget line is a graphical representation of all possible combinations of two goods that can be purchased with given income and prices, such that the cost of each of these combinations is equal to the money income of the consumer. 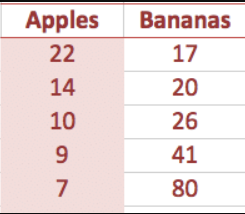 A budget line shows the combination of goods that can be afforded with your current income. 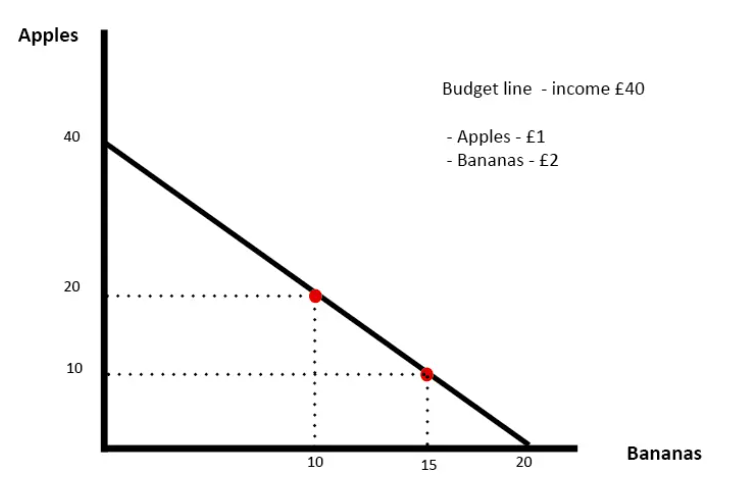 Budget set is the collection of all bundles that the consumer can buy with her income at the prevailing market prices. 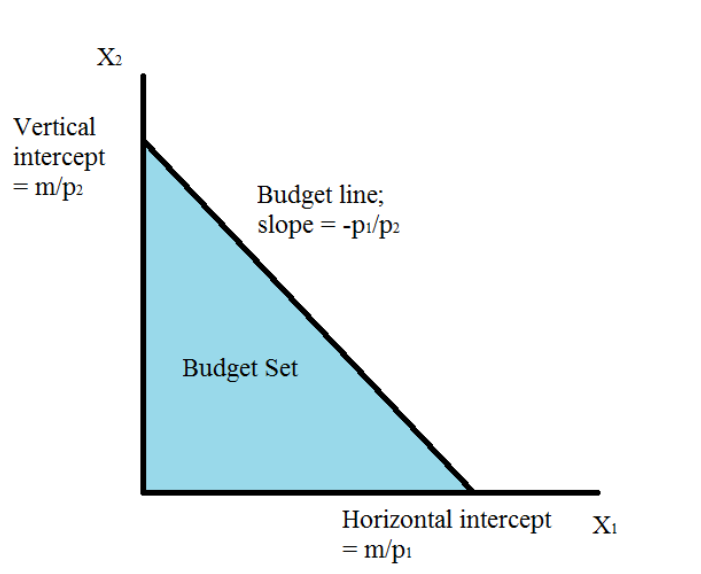 Constant returns to scale is a property of production function that holds when a proportional increase in all inputs results in an increase in output by the same proportion.

Cost function describes the least cost of producing each level of output given prices of factors of production and technology.

Decreasing returns to scale is a property of production function that holds when a proportional increase in all inputs results in an increase in output by less than the proportion. 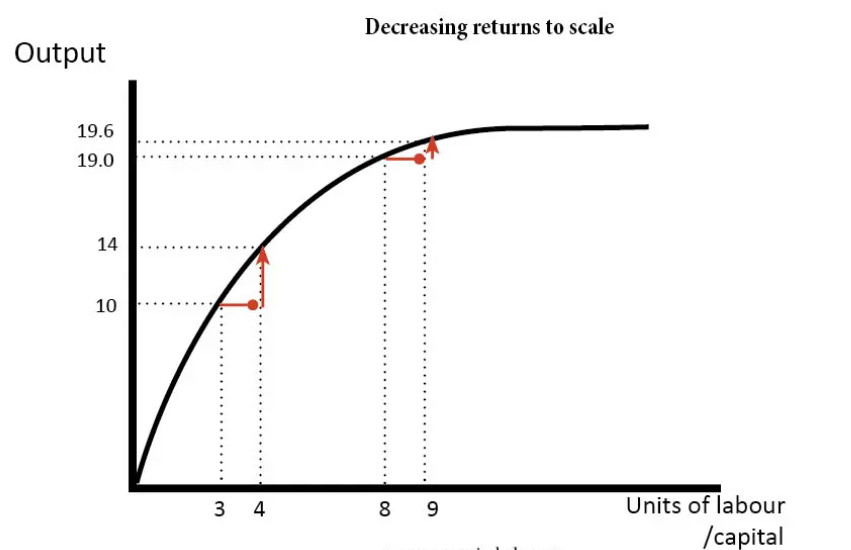 Disposable income, also known as disposable personal income (DPI), is the amount of money that households have available for spending and saving after income taxes have been accounted for.

Increasing returns to scale is a property of production function that holds when a proportional increase in all inputs results in an increase in output by more than the proportion. 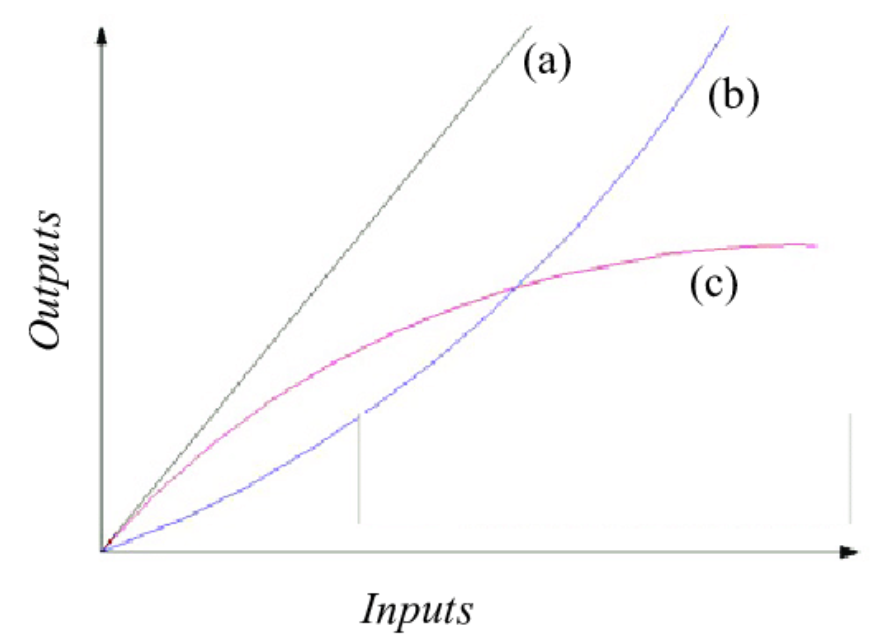 Demand function A consumer’s demand function for a good gives the amount of the good that the consumer chooses at different levels of its price when the other things remain unchanged.

Equilibrium is a situation where the plans of all consumers and firms in the market match.

Excess demand: If at a price market, demand exceeds market supply, it is said that excess demand exists in the market at that price.

Excess supply If at a price market, supply is greater than market demand, it is said that there is excess supply in the market at that price. The firm’s supply curve shows the levels of output that a profit maximising firm will choose to produce at different values of the market price.

Income effect: The income effect is the change in demand for a good or service caused by a change in a consumer's purchasing power resulting from a change in real income. This change can be the result of a rise in wages etc., or because existing income is freed up by a decrease or increase in the price of a good that money is being spent on.

Increasing returns to scale is a property of production function that holds when a proportional increase in all inputs results in an increase in output by more than the proportion.

Indexation is a system of economic regulation where wages and interests are tied to the cost of living index in order to reduce the effects of inflation. 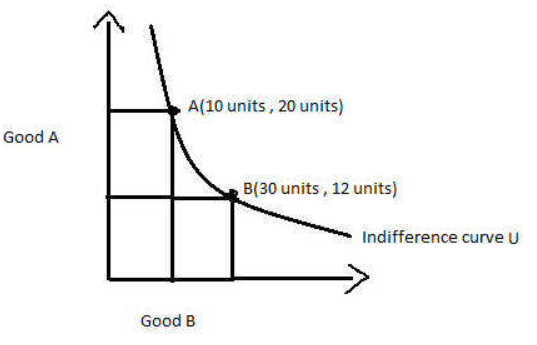 Inferior good, A good for which the demand decreases with an increase in the income of the consumer is called an inferior good.

Types of Income Elasticity of Demand

The isoquant curve is a graph, that charts all inputs that produce a specified level of output. This graph is used as a metric for the influence that the inputs have on the level of output or production that can be obtained. Law of diminishing marginal product, it states that advantages gained from slight improvement on the input side of the production equation will only advance marginally per unit and may level off or even decrease after a specific point.

The long-run is a period of time in which all factors of production and costs are variable. In the long run, firms are able to adjust all costs, whereas, in the short run, firms are only able to influence prices through adjustments made to production levels.

Marginal cost Change is the total cost per unit of change in output.

Marginal product Change in output per unit of change in the input when all other inputs are held constant.

Marginal revenue (MR) is the increase in revenue that results from the sale of one additional unit of output. While marginal revenue can remain constant over a certain level of output, it follows from the law of diminishing returns and will eventually slow down as the output level increases. In economic theory, perfectly competitive firms continue producing output until marginal revenue equals marginal cost. 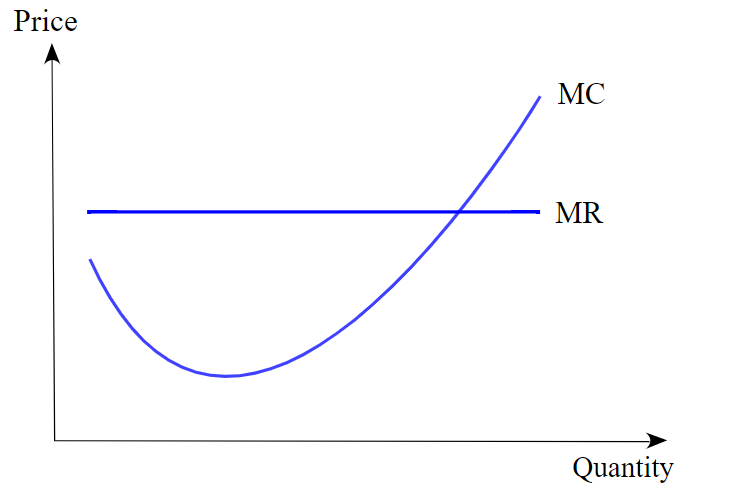 The market supply curve shows the output levels that firms in the market produce in aggregate corresponding to different values of the market price.

Monopolistic competition is a market structure where there exists a very large number of sellers selling differentiated but substitutable products.

Monopoly A market structure in which there is a single seller and there are sufficient restrictions to prevent any other seller from entering the market.

Monotonic preferences A consumer’s preferences are monotonic if and only if between any two bundles, the consumer prefers the bundle which has more of at least one of the goods and no less of the other good as compared to the other bundle.

Normal good A good for which the demand increases with an increase in the income of the consumer is called a normal good.

Normal profit The profit level that is just enough to cover the explicit costs and opportunity costs of the firm is called the normal profit.

Oligopoly A market consisting of more than one (but few) sellers is called an oligopoly.

Opportunity costs represent the potential benefits an individual, investor, or business misses out on when choosing one alternative over another. The idea of opportunity costs is a major concept in economics.

Perfect competition A market environment wherein (i) all firms in the market produce the same good and (ii) buyers and sellers are price-takers.

A price ceiling is the mandated maximum amount a seller is allowed to charge for a product or service. Usually set by law, price ceilings are typically applied only to staples such as food and energy products when such goods become unaffordable to regular consumers. Some areas have rent ceilings to protect renters from rapidly climbing rates on residences.

Price elasticity of supply is the percentage change in quantity supplied due to a one percent change in the market price of the good.

Price floor The government-imposed lower limit on the price that may be charged for a particular good or service is called the price floor.

Price line is a horizontal straight line that shows the relationship between market price and a firm’s output level.

Price War, A price war is a competitive exchange among rival companies that lower the price points on their products, in a strategic attempt to undercut one another and capture greater market share. A price war may be used to increase revenue in the short term, or it may be employed as a longer-term strategy.

Productivity measures output per unit of input, such as labour, capital, or any other resource and is typically calculated for the economy as a whole, as a ratio of gross domestic product (GDP) to hours worked.

A production function shows the maximum quantity of output that can be produced by using different combinations of the inputs.

Profit is the difference between a firm’s total revenue and its total cost of production.

The short-run is a concept that states that, within a certain period in the future, at least one input is fixed while others are variable. It expresses the idea that an economy behaves differently depending on the length of time it has to react to certain stimuli. The short-run does not refer to a specific duration of time but rather is unique to the firm, industry, or economic variable being studied.

Shut down point is a level of operations at which a company experiences no benefit for continuing operations and therefore decides to shut down temporarily—or in some cases permanently. It results from the combination of output and price where the company earns just enough revenue to cover its total variable costs. The shutdown point denotes the exact moment when a company’s (marginal) revenue is equal to its variable (marginal) costs—in other words, it occurs when the marginal profit becomes negative.

Total cost is the sum of total fixed cost and total variable cost.

Total return, when measuring performance, is the actual rate of return of an investment or a pool of investments over a given evaluation period. Total return includes interest, capital gains, dividends and distributions realized over a given period of time.

Total revenue refers to the total receipts from sales of a given quantity of goods or services. It is the total income of a business and is calculated by multiplying the number of goods sold by the price of the goods.

Total revenue curve shows the relationship between a firm’s total revenue and the firm’s output level. 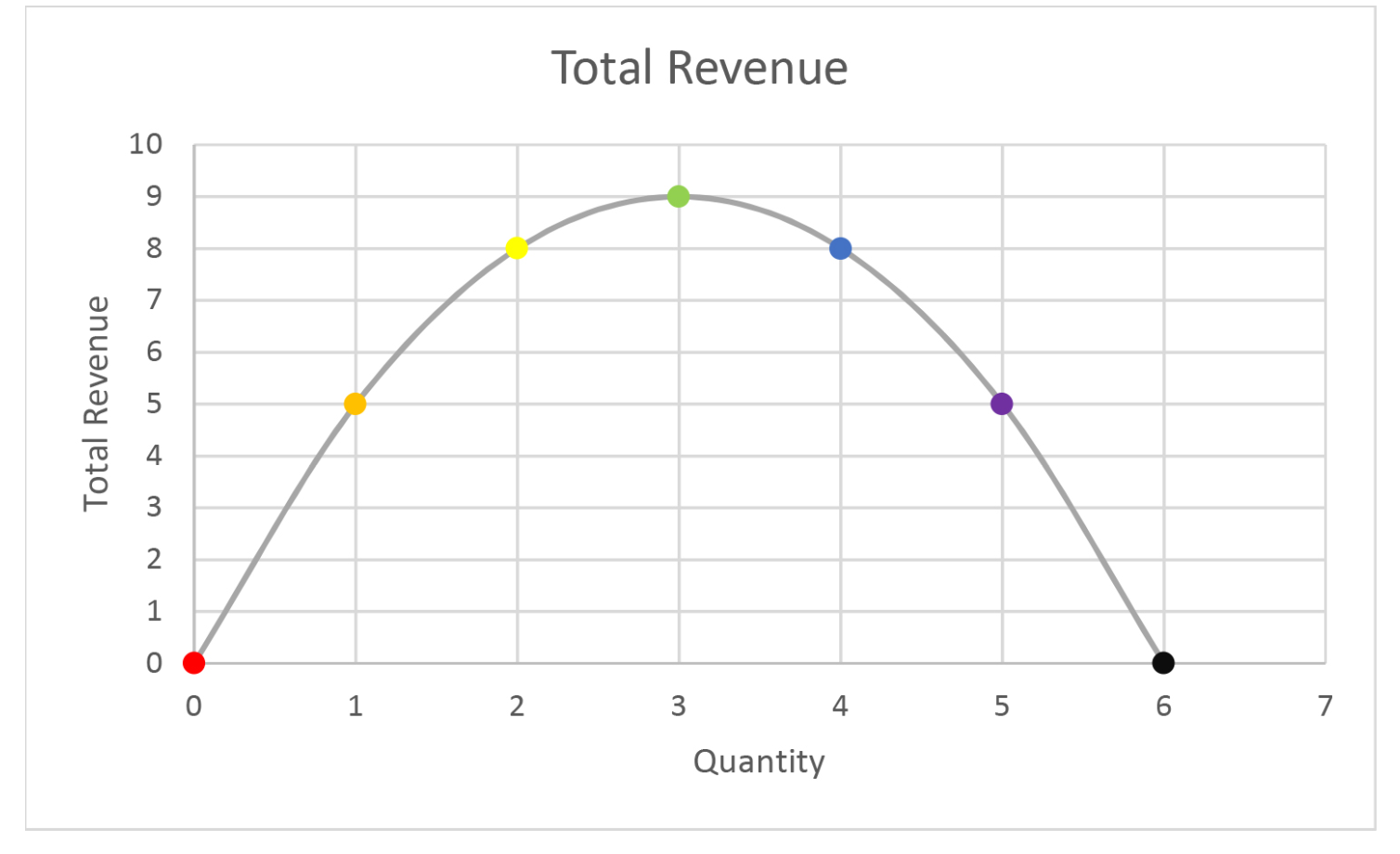 Variable input An input the amount of which can be varied.

A Veblen good is a good for which demand increases as the price increases.