Context: The arrest of five terror suspects in Delhi- two of whom were allegedly involved in the murder of Shaurya Chakra awardee Balwinder Singh in Punjab in October- has turned the spotlight on the embers of the long-dead and buried Khalistan movement. 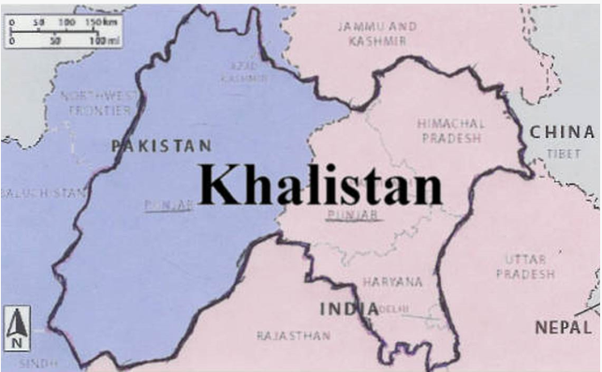 The Khalistan movement is a Sikh separatist movement seeking to create a homeland for Sikhs by establishing a sovereign state, called Khalistān in the Punjab Region. Such a state existed in Punjab from 1709 to 1849.

The above two movements have risen Sikh nationalism and through Khalsa schools propagating Sikh nationalism became easy and events afters independence have strengthened the claim of Khalistan.

Although these events have sown the seeds of Khalistan, the Khalistan movement was intensified by the following events

The Khalistan movement which started on Indian Soil is no more restricted to India and the movement has slowly gained attraction from many countries due to people supporting the movement or state support to the movement.

The report, released by the Macdonald-Laurier Institute(a Canadian think tank) and titled “Khalistan: A project of Pakistan“, alleges that Khalistan is a geopolitical project nurtured by Pakistan, and threatens the national security of Indians and Canadians.

Of the many separatist insurgencies, India has faced since independence, those in the states of Punjab and Jammu and Kashmir have proven the most destructive and potent threats to the country’s territorial integrity.

The secessionist movements such as the Khalistan movement should be tackled smoothly without hurting the sentiments of Sikhs. It is need of the hour that the Indian government must take steps and measures to prevent the movement from gathering attraction by arresting the sympathizers and supporters of Khalistan as done in the recent Punjab case(arrested Khalistani terrorist).