Sedition Law and Debate Around it

Historical Background of the Sedition Law 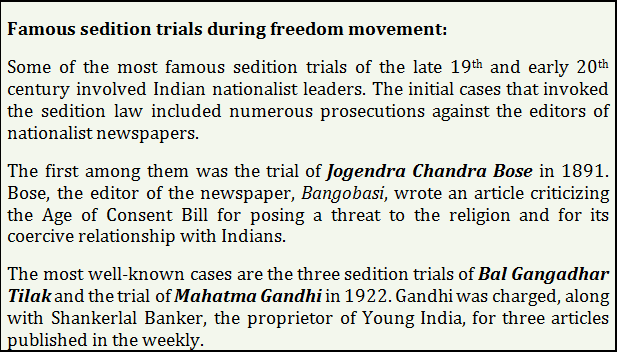 Sedition is a crime under Section 124A of the Indian Penal Code (IPC).

It defines sedition as an offence committed when “any person by words, either spoken or written, or by signs, or by visible representation, or otherwise, brings or attempts to bring into hatred or contempt, or excites or attempts to excite disaffection towards the government established by law in India”.

Disaffection includes disloyalty and all feelings of enmity. However, comments without exciting or attempting to excite hatred, contempt or disaffection, will not constitute an offence under this section.

Punishment for the Offence of Sedition:

The Relevance of Sedition Law

Arguments in favour of Sedition Law

The law and its application clearly distinguish between strong criticism of the government and incitement of violence. Even if the letter is considered hateful, or contemptuous and disdainful of the government, if it did not incite violence, it is not seditious. Unfortunately, Indian courts have, especially recently, repeatedly failed to appreciate this distinction.
The broad scope of Section 124A means that the state can use it to chase those who challenge its power, and the mere pressing of sedition charges ends up acting as a deterrent against any voice of dissent or criticism.

The disutility of the sedition law