Here is the Question for today. Read more about the SMAP 2021 Initiative & how to participate & How to Upload Answers.
If you are viewing this on the Samajho Learning App, Click Here to Open the Question Link.

Ramdas is a powerful farmer of the Gorakhpur district in UP and lives in a medium-sized village. He is a local politician & Sarpanch of the Gram Panchayat. Besides three married daughters, Ramdas has a 24-year-old young son Raghu. Being the only son of the family, Raghu was pampered and became spoilt. He was arrogant, always wanted to have his way, and would pick up a fight at the slightest opportunity. At the age of 17, Raghu had got into the habit of drinking. Village elders had advised Ramdas about his son's wrongdoing, but Ramdas paid no heed to them.

By the time he was 21, the people in the village talked in whispers, that Ramdas had been shot at by Raghu. While Raghu was arrested along with five others, it was rumoured that the major burden of the incident had been shifted on to another person. A few years later, Atmaram the money-lender, was also shot at in suspicious circumstances, which was also rumoured to have been done by Raghu. It is known in the village that Raghu had cast his evil eyes on Atmaram’s beautiful daughter Shanti and against this Atmaram had vehemently protested. Raghu was arrested, but once again some of the witnesses retracted from their statements. The final turning point was his third attempt to murder, which occurred with Shanti, the primary school teacher. Raghu threw acid at her in full view of a large number of persons. This time there was no escape for Raghu. He was arrested and remained in jail, despite several attempts to come out. Shanti somehow survived & her family is terrified, but since then, Raghu has been waiting to come out of jail & attack her again.

The district is represented in the state cabinet by a Minister whose constituency includes Ramdas’ village. Ramdas happens to be a long-time political associate of the Minister who is currently very influential in the government.

You are the present District Magistrate who has directly worked under this Minister in the secretariat before he came to this district. The Minister is very well educated, Gandhian in leaning, and without any moral blemish. In fact, he had recommended your posting as the DM.

Yesterday, three MLAs of the district, met you, with a joint application for recommending the government grant of parole for three months to Raghu since his mother died three days ago and since the ailing Ramdas needed his help to carry out agricultural activities. Later, the Cabinet Minister from the District called you for recommending parole to Raghu. The Minister did not claim that Raghu is innocent; his pleading was restricted to the circumstances the family was passing through. The Minister's request has created a somewhat difficult situation for you. This Minister rarely intervenes in any administrative day-to-day functions. Any applications received during his tour are always discussed on their merits with officials and then the officials take appropriate decisions.

What are the challenges faced by you here as DM? What would be your decision in this matter & why?

Please Note: This is not a Model Answer but, the best answer from today based on peer review & Samajho Team's shortlisting. This answer would be evaluated by Rohit sir to teach you the Art of Mains Answer Writing. 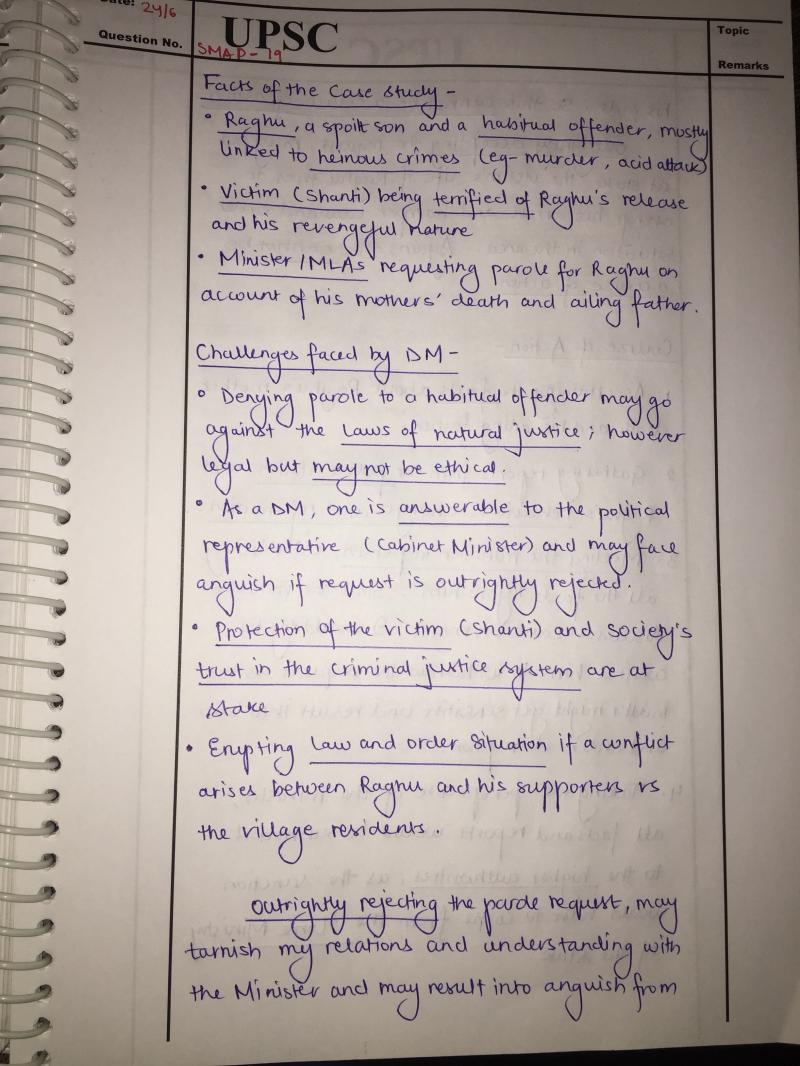 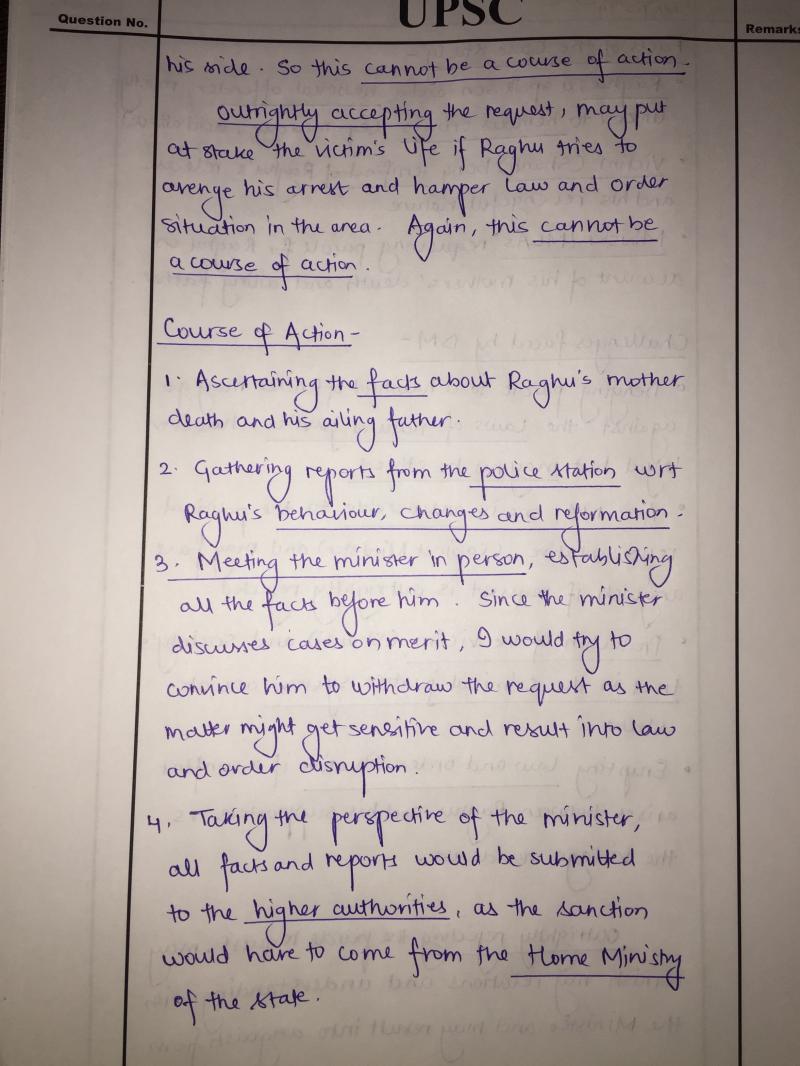 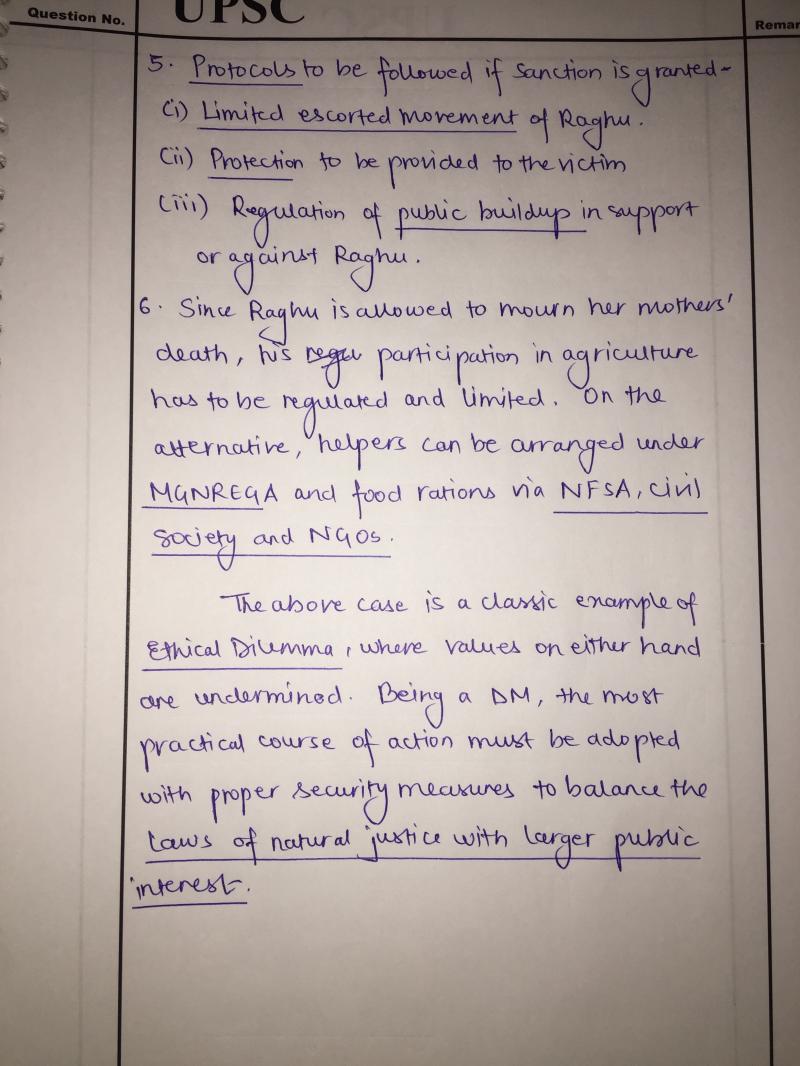