Context: Urban flooding has wreaked havoc on major Indian cities in the recent past. In Hyderabad recently, floods caused unprecedented damage to lives and infrastructure. Barely five years ago, it was Chennai that saw a massive flood costing much damage and lives; Gurugram over the past few years comes to a complete standstill during the monsoon months, and for Mumbai, the monsoon has become synonymous with flooding and enormous damages. As the incidence of climate variability and extreme weather events increases, urban flooding becomes more and more common. While the untimely heavy rains can be attributed to climate variability, the urban flooding is largely due to unplanned urbanisation.

In this article, we will look at major reasons behind urban flooding and measures that can be taken for effective urban flood management.

The term urban flood consists of two parts – ‘urban’ and ‘flood’. Flood is defined as “an overflow of a large body of water over areas not usually inundated”. Thus, flooding in urban areas is caused by intense and/or prolonged rainfall, which overwhelms the capacity of the drainage system.

Urban flooding is significantly different from rural flooding- urbanization increases flood risk by up to 3 times, increased peak flow result in flooding very quickly. Further, it affects a large number of people due to the high population density in urban areas.

Why is Urban Flooding Different?

India has a long coastline of 7,500 km and an estimated 14% of India’s total population lives alongside it that traverses nine states, 77 towns and cities including some of the fastest-growing such as Mumbai, Chennai, and Kochi making them more prone to flood due to adjacent sea and erratic monsoonal behaviour.

Aside from the present danger posed by extreme weather events such as heavy rainfall and cyclonic storms, more slow-onset impacts brought about by climate change also threaten the coastline. A 2016 UN report estimated that 40 million people in India will be at risk from sea-level rise by 2050. 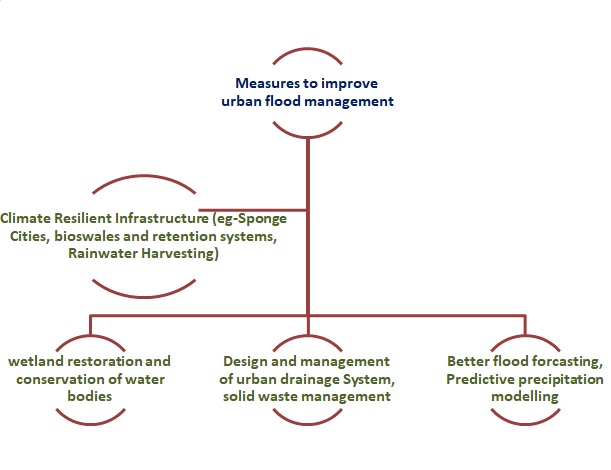 The key guideline was to create a National Hydro-meteorological Network.

The guidelines provide, that for providing early warning, the Central Water Commission (CWC) should maximize the real-time hydro-meteorological network to cover all the urban centres in dealing with urban flooding.

The requirement should consider all cities/ towns which are particularly located on river banks, upstream and downstream of major and medium dams and island cities. Based on that assessment, CWC will initiate the process to prepare a plan and implementation strategy.

Urban Flood management will not just help control recurring floods but also respond to other fault lines, provide for water security, more green spaces, and will make the city resilient and sustainable.