Context: Recently, the Parliament passed three labour codes- on industrial relations; occupational safety, health and working conditions; and social security. The three Bills are part of the government’s labour law reforms agenda, of which the first, the Code on Wages, which proposes universalisation of minimum wages, was passed by Parliament last year. 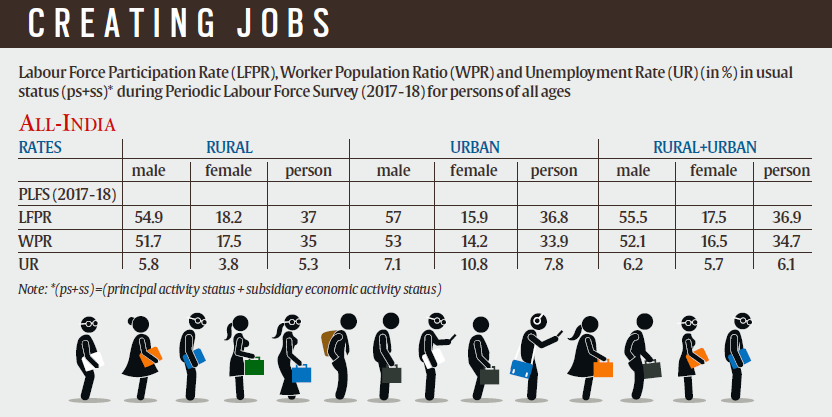 What are the objectives behind labour reforms?

Table- Details of Acts which are being subsumed by the four labour codes:

Powers to the central government to revise the threshold:

Powers to the central government to revise the threshold:

New conditions for carrying out a legal strike:

Re-skilling fund: It has also proposed to set up a re-skilling fund for the training of retrenched workers with contribution from the employer, of an amount equal to 15 days last drawn by the worker.

The 2020 Bill states that the central government may, by notification, apply the Code to any establishment (subject to size-threshold as may be notified).

Gig workers refer to workers outside the traditional employer-employee relationship. Platform workers are those who access organisations or individuals through an online platform and provide services or solve specific problems.

The 2020 Bill makes the following changes for such workers:

Term of eligibility for gratuity:

Additional powers during an epidemic:  The 2020 Bill adds new clauses which may become applicable in the cases of an epidemic. For example, the central government may defer or reduce the employer’s or employee’s contributions (under PF and ESI) for a period of up to three months in the case of a pandemic, endemic, or national disaster.

The 2020 Bill empowers the state government to exempt any new factory from the provisions of the Code in order to create more economic activity and employment.

The threshold for coverage of establishments

Employment of women: The 2020 Bill provides that women will be entitled to be employed in all establishments for all types of work under the Bill.  It also provides that in case they are required to work in hazardous or dangerous operations, the government may require the employer to provide adequate safeguards prior to their employment.

The Periodic Labour Force Survey observes that 71% of regular wage/salaried workers in the non-agriculture sector did not have a written contract, and 50% were without social security cover. The new laws, by simplifying compliance, should create an incentive for workforce formalisation.

The new labour codes will help in increasing the pace of generating good quality jobs to cater to the growing workforce, their rising aspirations and to absorb out-migration of labour from agriculture. This way India can fully be able to capitalize on its inherent labour and skill cost and help a fast economic recovery especially post Covid-19.

Key issues in the Code on Social Security, 2020

Provisions on gig workers and platforms workers are unclear:

Key Issues in the Code on Occupational Safety, Health and Working Conditions, 2020

The rationale for some special provisions unclear:

Civil Court barred from hearing matters under the Code:

Key Issues with the Code on Wages 2019

Issues with the consolidation

Despite the progress, drafting of the labour codes is also a case of missed opportunities. Compensation payable to workmen at the time of his exit from the service has not been increased.

Tribunals should have been given the power to grant the injunction in appropriate cases without driving the litigants to court for such interim relief.

A division bench of tribunals should have been formed as an appellate court against the award of the industrial tribunal as it is well-known that quasi-judicial powers vested with authorities have not worked satisfactorily.

While industries are entitled to make a reasonable profit on investment, workers are equally entitled to reasonable wage and good and safe working conditions. It is an uphill task to enact and codify rules that satisfy both parties and the mid path, taking care of the interest of both should be the goal of any labour legislation. To that end, the four labour codes have been rightly grouped together.

While the labour codes could be called “historic” because they come after nearly a century, the exuberance of the Union govt terming them as “landmark” and “game-changer” is an exaggeration. The laws have adapted to the prevailing industrial

and economic activity, but there is a long way to go to achieve a fine balance in the interest of workers and the industry.